The Art of Screening the Deal: What we look for in Venture Capital Associates

In 2018, 2,768 Venture Capital financings of $1–5M were funded in the United States, or roughly 7.5 investment-grade deals per day, on top of the thousands screened and passed. Assuming some 90% of seed deals don’t get funded, that leaves firms staring down a funnel of 27,000 deals/year.

It’s no wonder most firms lean so heavily on Associates to act as gatekeepers, weeding out thousands of investments before championing a select few for the partners’ consideration. After all, the average Partner’s responsibilities still reach far beyond the investment committee — including everything from portfolio management to fundraising and governance.

There’s only one problem with this model: Associates are generally the least experienced member of the team. Yet they’re the ones to sit on the front lines and determine which companies the Partners get to meet. 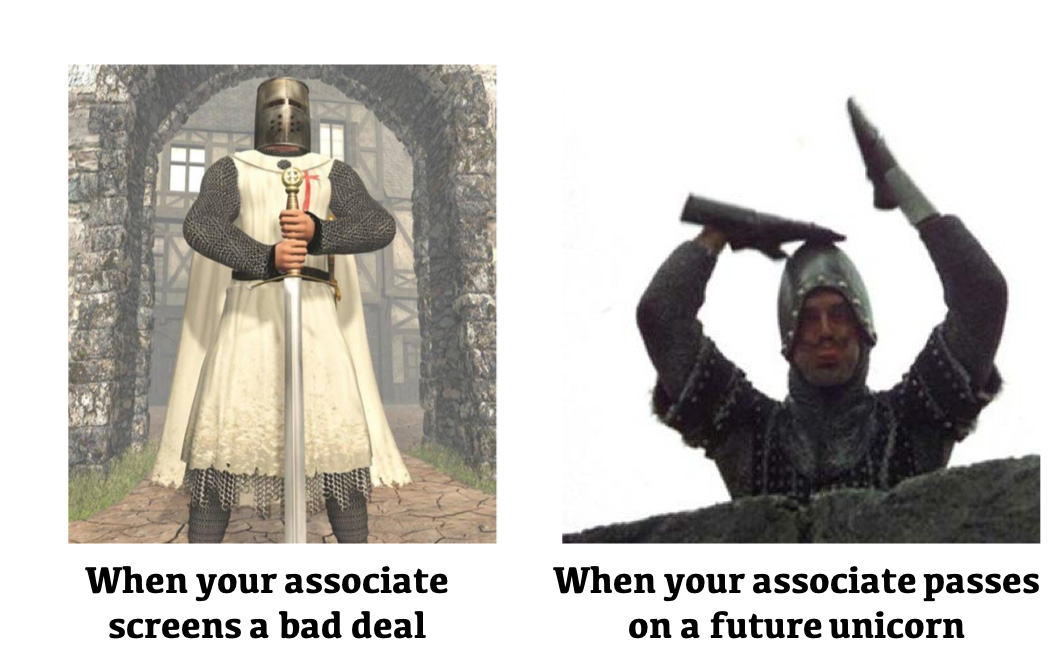 “Now go away or I shall taunt you a second time-a!”

At Tuhaye, we believe if our investment committee only discusses the subset of our overall deal flow that our associates subjectively liked, then our firm is upside-down. Therefore, we put a culture in place that empowers Associates to source, research, diligence, and synthesize every deal without unilaterally closing a door on the next Mark Zuckerberg. We also measure performance based on investment-grade deals “brought to the committee”, not by “who sourced great deals”.

In other words, our Associates astutely screen deals; they never pass on them.

Culturally, our firm is rooted in the idea that “saying no” to a venture investment is easy. Take a look through Bessemer’s Anti-Portfolio and you’ll see exactly how easy it can be.

See, I just passed on 4 companies right there! In fact, passing on companies is so easy, that some of the most notable firms in the VC space have noted that they can pass on investments 100 times a day and in less than 60 seconds.

However, as the Bessemer example shows, allowing the firm to get to “no” quickly, meant the firm lost out on a massive investment return. This is exactly what we strive to avoid, and it starts with our screening processes.

So How Do We Use Our Associates?

It starts at the interview. When interviewing prospective Associates, we present a pitch deck from a well-known venture success story. We then ask candidates to detail five reasons why we should not make an investment, strictly based on materials in the deck.
Give it a try. Take a look at the pitch deck for Airbnb. Forget everything out know about its successes and jot down your 5 hesitations.

Why do we do this exercise?

Too often interviews center around a case study or investment analysis using either a prospective investment — or worse — a portfolio company where the outcome still hasn’t been determined. This can lead firms to reject candidates who think differently than the partnership based on an answer not aligned with the partners’ view, limiting the diversity of opinion on the investment committee. By forcing an answer, we create a standard basis from which to compare candidates on their body of work, removing any bias we might have towards what we might view to be the ‘right’ answer. This is a small, but critical piece of the puzzle.

2) We isolate facts from opinion

In forcing the negative answer (in this case, pass on Airbnb), we know the analysis created will be different than the associate’s opinion of the investment (influenced in hindsight by how successful the investment has been). Since the analysis disagrees with their opinion of the deal, we know we’re going to get a more fact-driven assessment, even if those facts would’ve led to the wrong decision (more on this later!). Long-term, our investment committee will be best served by an associate’s ability to aggregate and present facts, not make their own determinations on what they mean.
Process-wise, this is what it really means to “screen” a deal, vs. “pass” on a deal. Screening a deal involves taking factual items about the deal and demonstrating why it’s not a relevant opportunity to evaluate. Passing involves critical thought and rigor based on an analysis of the opportunity.

An extremely basic approach for screening vs. passing.

We believe associates should be empowered to screen investments, but it requires an investment committee approach that maximize the firm’s research, experience, and unique viewpoints of each of the team members (including the associate – this is where we want to hear “I like it because X” or “I think it will fail because Y”) to pass on a deal.

We know through the benefit of hindsight that not investing in Airbnb here would’ve been wrong. Not only that, the more defensible and well-thought this analysis is, the more WRONG it would be.

The lesson then is that if the investment committee didn’t actually think critically about the investment and understand the weaknesses of the underlying facts found, then the firm would’ve passed and we’d all be the poorer for it. This is the most important lesson any venture capitalist can learn in their career, and the most critical trait we’re trying to isolate for in identifying unique talent.

The sum of these three elements hidden in the case study helps not only identify not just the smartest candidate but the candidate who can best help an investment committee. Lastly, the best interview processes look to determine a cultural fit early on.

Passing on a deal is easy. Holding an optimistically contrarian viewpoint. Taking a risk on a company in spite of consensus opinion. That’s the hardest part of being a successful venture capitalist.